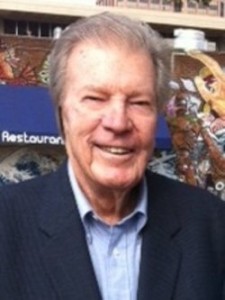 He attended Maur Hill School in Atchison, KS, and received a BA in Biology in 1950 from Spring Hill College (Mobile, AL), and a BS in Geological Engineering in 1958 from the Colorado School of Mines (Golden, CO).

He served in the U.S. Army from 1950 to 1952 as Sergeant in Charge of artillery fire direction, and was stationed in Anchorage, Alaska at Ft. Richardson.

After graduating from the School of Mines, he and his family lived in Golden, CO and Wheatridge, CO, for many years, during which time he worked as a civil engineer on numerous water and sewer projects throughout Colorado. He was a member of the American Society of Civil Engineers and the Professional Engineers of Colorado.

Bob lived in the family’s summer home in Woodland Park, CO, for many years before returning to Denver in 2011. His last residence was at Clermont Park, a Christian retirement community in Denver.

He was for many years the main family historian for the extended Roberts family and conducted numerous research trips to Kentucky and Maryland. His ancestors included members of a group of Catholic families led by Basil Hayden from Maryland to Kentucky in 1785.

A Rosary and Funeral Mass for Bob will be held at 9:30 AM on Friday, December 6, 2013 at St. Joseph Catholic Church, 969 Ulysses Street, Golden, Colorado. Interment at Mt. Olivet Cemetery. (Find A Grave)

Please share memories and leave condolences for Bob’s family by signing the guestbook.