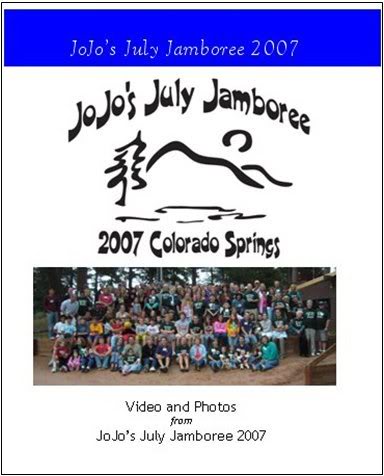 JoJo’s July Jamboree 2007 DVD Set
The complete set consists of 6 DVDs and 2 CDs (8 disks total).
The DVDs should play in most DVD players attached to TVs and in most computer DVD drives. Where there are different scenes, those are selectable from a menu. The audio tracks on the video interviews of Harry Whelan, Terry Malone and Annie Tinker have been enhanced by an audio engineer as Chug didn’t use microphones to record those (yes, he will next time…).
The CDs contain all of the photographs that Chug took and those that were sent by others.

All of the photographs in the slide show on Disk 6 are also available on the 2 CDs. To view these photographs, you need to place the CDs in a computer CD/DVD drive and click on the files. To view photographs and other images on your computer, Chug recommends using Picasa, a free program from Google: www.picasa.com
You can copy the images on the CDs to your computer, USB flash drives for digital photo frames, and to make print copies at Costco or the photo kiosks at many drug stores.
The photographs are available at no charge online in a Picasa album, and in a 4-color 66-page book directly from MyPublisher. If you are interested in either, contact Chug and he’ll send information (the book can be seen online and then ordered directly from MyPublisher.com).
All of the material on the disks is

Copyright © (P) 2007 by Chug Roberts. All Rights Reserved.
Family members may freely make copies in any medium for themselves and other family members.
No commercial use is allowed.

This entry was posted in JJJJ 2007 Photos. Bookmark the permalink.