All of the “Indian prints” at Woodland Park are art that was used on calendar covers from the calendars of the Atchison, Topeka & Santa Fe Railway Company (AT&SF) in the 1910s, 1920s, and 1930s. I believe that the artist for all of the prints at Woodland was E.I Couse (Also see Eanger Irving Couse (1866-1936).) 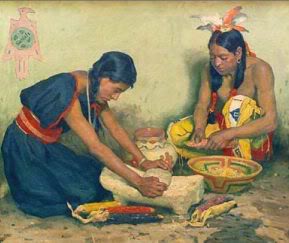 This is the cover image for the 1927 Santa Fe calendar: “Grinding Corn,” by E.I. Couse.

The Atchison, Topeka and Santa Fe Railway grew in a cloud of violence that quickly became legendary. Wherever the fledgling railroad went in the 1870’s, it left a raw and brawling cow town in its wake. At the Colorado ranges gunplay broke out between the work crews of the Santa Fe and the rival Denver & Rio Grande. By the 1890’s this inaugural roughhousing had subsided, leaving the Santa Fe with a right-of-way that passed through some of the most beautiful landscape in creation, and a nation full of potential customers who, having heard the stories, were afraid to go and see it. This was the problem confronting W. H. Simpson when he established the railroad’s advertising department in 1896. His job was to alert people to the thundering scenery of the Santa Fe route, and it is not surprising that he lit on the idea of having artists paint it and then using their works in colorful promotion calendars and posters. What is surprising is the scope and success of the project. A few artists had already established themselves in New Mexico, drawn to the highly picturesque town of Taos at the base of a mountain that rose up five thousand feet through air clear as gin. The railroad approached them and soon began to supply transportation and lodgings for other painters who would journey to the Southwest. The Santa Fe printed its first advertising calendar in 1907 and thereafter was chief among the very few early patrons of western art. In time the collection grew to a total of 553 paintings. Of these, more than two hundred feature the Indians of the Southwest. The one above, by Lon Megargee, is entitled Navajos Watching Santa Fe Train. It and its fellows provide an impressive glimpse of ancient cultures that were disappearing even as the artists recorded them. We herewith present the first published portfolio of the Santa Fe Collection of Southwestern Art.

At the turn of the century Taos was a small village located in a lush valley deep in the Sangre de Cristo mountains. The 7,000 foot elevation provided crystal clear skies which contrasted sharply with the vivid colors of the aspen groves, piñon pine forests, and stands of cottonwoods. The deep blue, azure, purple, red, and rose skies stretched over the eroded arroyos, mesas, buttes, and canyons with their yellow, red, orange, and brown earth colors. Taos celebrity Mabel Dodge Luhan later declared: “Everyone is surprised at that first view of Taos Valley – it is so beautiful. The mountains, eighteen miles away, curve half round it in a crescent, and the desert lies within its dark encircling grasp. Taos is an oasis, emerald-green beyond the sagebrush, drinking water from the high mountain lakes and streams.” The pristine air, the natural colors and the light, the brilliant light, overwhelmed the viewer. The village contained a pueblo some 400 years old and a century-old church. Both contributed to the primitive effect of the valley. Ernest L. Blumenschein, to become one of the most famous of the Taos artists, remembered: “When I came into this valley – for the first time in my life, I saw whole paintings right before my eyes. Everywhere I looked I saw paintings perfectly organized ready for paint.” Artist Joseph Henry Sharp must he given credit for discovering this paradise.

“The Atchison, Topeka and Santa Fe Railway and the Development of the Taos and Santa Fe Art Colonies,” by Keith L. Bryant, Jr., Western Historical Quarterly, October 1978 (footnotes omitted)
Here are the year and painting title of the Santa Fe calendar covers by E.I. Couse (click to see images – opens in new window):